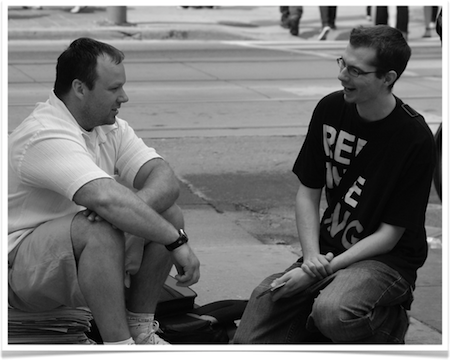 This past Friday it happened…AGAIN No, not JUST that we hit the streets to preach the Gospel – hopefully that’s obvious!:) But it’s what happened when we were witnessing that’s worth blogging about!

I was walking through the park with 6 members of our evangelism team of 14 (praise God!) when I used one of our million dollar bill gospel tracts to break the ice with a group of 4 young adults. “Did you guys get one of these?” I asked. As often is the case, they responded with: “No. What is it?”

“You’ve never seen one of those before?”, I responded in amazement (it never ceases to amaze men that we literally distribute hundreds of these every week yet there are always people who have never even seen them before!). “Well, can I ask you the million dollar question? It’s the most important question you’ll ever be asked!”, I said. “Sure!” their spokesperson responded. “OK, here it is…when your life ends here, where do you believe you will spend eternity?” And with that, it began…

Initially, the first young man seemed to be identifying himself as a sort of panentheist (CLICK  HERE for expert info on this false belief system). I followed up this confession of “faith” with the question, “So, are you looking for something to believe in, or are you looking for the truth?” As we put his belief system to the test in light of what we know to be truth, he quickly surrendered his false faith claims.

As the conversation unfolded, it turned out that the other young man claimed to be a born again Christian. “Great!” I responded. “A scenario that I love to play out with Christians is called “3 minutes to live”. Can we talk about that?” He agreed.

Evangelistic “Quick Tip”! When someone confesses themselves as a Christ-follower, we will often fast-track the conversation and initiate a very simple “3 Minutes to Live” scenario to ensure that they truly understand the biblical gospel, along with all those in their group.

Basically, the scenario goes like this: “If I had 3 minutes to live and I wasn’t right with God, what message would you share with me?” Often the “Christian” will begin to share a gospel message much different than that revealed in Scripture. After they share their understanding of the “gospel”, we turn the tables and then with them the biblical gospel.

This is a VERY effective way of witnessing to all those in your life who claim to be followers of Christ. It is also a great way to “ricochet” the biblical Gospel with a group of people. By preaching Christ strongly with one of the people in the group, the Word of God will ricochet to the ears of the others.;)

After the entire group clearly heard the Gospel, I then turned my attention again to the first young man I had initially spoken with. “Is it my imagination, or does this seem somewhat familiar to you?” I asked. “Yes”, he replied. “That’s because I was briefly attending a church here in the city with a couple friends of mine.” “If you don’t mind me asking, which church?”, I said. “Harvest Bible Chapel London.”

As you can imagine, when I dropped the bomb that I was a pastor at Harvest Bible Chapel London, his face lit up with “all-too-familiar” look of shock and awe! “Do you figure that God is trying to get your attention, my friend?” I believe that he will return to church soon. And if that wasn’t enough of a “coincidence”, take a wild guess as to who I just happened to run into just ten minutes after talking to this group? One of the friends from my church who knew this young man! God is so good…and so mighty to save!

This is not the first time this has happened. In fact, it has happened several times over the past few months. As such, I am posting this testimony as an encouragement to all seed sowers to continue being faithful to preach the Word in season and out of season, and to persist in doing the work of an evangelist.

After many years of sowing and watering the seed of God’s Word in the city of London – week after week after week of faithful witnessing with very little visible “evidence” of harvest – it’s only fairly recently that the Lord has begun bringing the increase right to our church! After all, the call is not just to make converts, but to make disciples!

So make a pact with your pastors, church, and evangelism team. To pray…to preach…and to make more Gospel-preaching disciples who will do the same for the glory and fame of Christ’s Name!

Cory McKenna is founder of The Cross Current, host of TCC Radio and TV, and Pastor of Local Missions at Harvest Bible Chapel London. He has street witnessed and open air preached in many major cities across North America. He is an experienced church and conference speaker who specializes in equipping evangelists and their churches to more faithfully preach the Gospel.